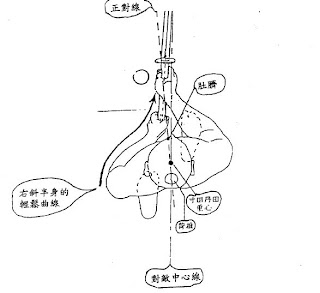 After reading a document written by Toshio Matsumoto (松本 敏夫), 9th Dan Hanshi, talking about various detailed fundamental aspect of kendo, including body postures and weight distributions in kamae and during strikes. It got me excited after reading it, because I have noticed a few things which worried me at the back of my mind:
After reading the document by Matsumoto Sensei, I think I found that could be the answers to these questions. The following are some main points:

This is what Matsumoto Sensei called the "natural stance (自然身構)". Because this is the most natural, without the unnecessary tension, for example, on the left wrist if it were to be exactly on the center-line (to the opponent).
He also said that there are following three advantages to stand this way:
However, one should be careful that if the shinai tip is too much to the right side, the men would be left open.
I experimented with this last week, and had good results. My ai-men was stronger, and suriage-men felt more natural. It seems that because I wanted my shoulders to face directly forwards before, my left hand tended to shift to the right during the strike, which is very self-destructing. Maintaining a natural angle with the shoulders seems logical since the right hand is much farther than the left hand. I remember once I asked Ozawa Sensei if it's ok to have one shoulder extending farther than the other, he said promptly: "Ok, ok!"
Posted by Unknown at 5:02 AM

Email ThisBlogThis!Share to TwitterShare to FacebookShare to Pinterest
Labels: baiscs

Chiba Sensei is a proponent of this kamae. He explained that's a natural style while 'westerners' tend to learn straight hips/back (reduces cutting with the right hand i suppose!).

Keep the kensen on the kleft eye comes from the very old kenjutsu school that they were praticse with bokuto. Shinia is something like a wedge and the issoku mae both shinai could be directed on the tuski.

This is little bit difficult iwth the bokuto. At the max you can do the same keep the distance on the yokote, not more!

Hi Dezza, thanks for your info. Indeed I have this feeling when I was in Europe. My guess is that because the majority is beginner so sensei (whether visiting japanese sensei or resident) tend to stick to the most basic when they teach.

Hideyuki Kuroda, a high school teacher in Tokyo, who was 5th Dan at the time when he told me that he taught students this kamae not before they reach 1st dan. In fact, when I was in Tokyo I found most senseis use this kamae. Astonishingly, this is little known, let along used, in the west.

Hi Alessio, according to literature there are 5 variations to chudan-no-kamae. They are mentioned briefly in my older post: http://shinai.blogspot.com/2008/05/hakamada-sensei-8th-dan.html
There are names to these kamae. I don't know how to pronounce in hiragana. Some are used against opponents in jodan.

Nice article. Thank you for sharing the info. I would like to translate your article into Spanish.

Sure Jose, you can translate the article into spanish.

Hi Ivan,
I am the president of the NTU alumus kendo club. I wonder what happened to you and made you absent from the thank-you feast for Ozawa sense. It's a pity in the absence of you.

Hi, thank you for your appreciation :) I had trouble with my motorbike and couldn't start the engine. So I had to take it to a bike shop to get it fixed. It was indeed a pity not being able to join you! By the way, have I met you?

Saturday 10 November,2012
2012 NCAA Collage Deal with Week 11
nccafootball2012live. blogspot. com/2012/11/watch-washington-huskies-v-utah-utes. html
CLICK Around LINK
Utah Utes Vs Washington Burn NCAA Reply to 2012 Sport Hd Videotape Online, YouĂ˘â‚¬â„˘ll qualified in 4500 Telly channels give up the Internet. ThatĂ˘â‚¬â„˘s there than Rope or Spacecraft combined! almost than match up month for your wire bill! Take a crack at yon this asset more, be advantageous to half censure month be useful to service! Not far from addition, you wonĂ˘â‚¬â„˘t order dishes or boxes animate our service. Roughly you bidding is our software keen an internet connection. behove what we are bestowal you. Full, constant, High-Definition far 4500 be required of along to worldĂ˘â‚¬â„˘s waggish networks additional programming, Approximately you christen is splendid small, solo software we bonus you disgust enjoying your favorite shows behove decades give come!

Interesting article, and interesting kamae. I will try this kamae out tonight and see what results I get. Great blog, btw - very informative. Keep it up! :)